A software developer at your company enjoys grabbing a beer with a product-development manager, but can’t stand the marketing director who sits next to him. The head of human resources has coffee with a salesperson every day, but doesn’t trust the office manager.

While most executives may not think those personal relationships are important to the success of their company, Vikas Narula is building a business based on the idea that they can reveal a lot about what’s working — or not working — within firms.

Narula is CEO of Keyhubs, a Minneapolis-based startup armed with software that can analyze social networks within businesses. The company, which is about two years old, already is gaining traction in the market, landing deals with customers such as Thrivent Financial for Lutherans, Barclays Capital in New York and Natick, Mass.-based Boston Scientific Corp. Narula declined to disclose KeyHubs’ revenue, but said sales through August of this year are up fourfold compared to the same period a year ago. The company is self-funded and hasn’t tried to raise venture capital.

Narula spent most of his career in the software industry, working for Twin Cities firms such as Vital Images Inc. in Eden Prairie and Virtual Radiologic Corp.   Four years ago, he decided to go to business school and enrolled in the MBA program at Duke University. There, he discovered a wealth of academic research demonstrating the importance of social networks within businesses.

“There’s an org chart, but there are informal relationships that play a bigger role in how work is done,” Narula said. “It’s important for managers to understand those networks.”

Narula went on to create software that can create detailed maps of hubs and spokes showing those relationships. Keyhubs creates the diagrams after surveying a company’s employees online, asking questions such as, “who do you hang out with?” and “who do you trust?” The results often surprise managers, Narula said.

“A lot of times, the most influential people in an organization are not at the top. They’re not even in the line of sight of the folks at the top.”

Keyhubs generates sales on a per-project basis, and also inks revenue-sharing deals with consulting firms that want to offer the social-networking analysis service.

“We discovered that there was a lot of talent and influencers in a level of the organization that we normally hadn’t looked at,” he said. 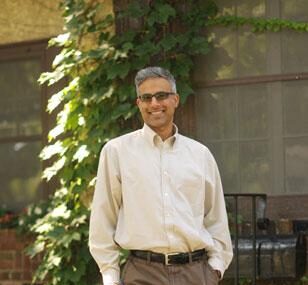 Point-in-time evaluations with real-time insights and services, which help uncover hidden talent, help leaders be better influencers, and break down barriers that keep organizations from their full potential.

Keyhubs provides introductory keynotes and / or workshops around the concept and power of connection, influence, and “bridging divides”.

Book a Keynote or Workshop